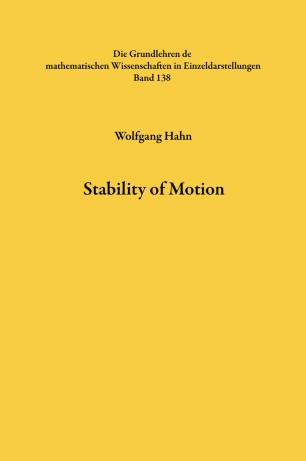 The theory of the stability of motion has gained increasing signifi­ cance in the last decades as is apparent from the large number of publi­ cations on the subject. A considerable part of this work is concerned with practical problems, especially problems from the area of controls and servo-mechanisms, and concrete problems from engineering were the ones which first gave the decisin' impetus for the expansion and modern development of stability theory. In comparison with the many single publications, which are num­ bered in the thousands, the number of books on stability theory, and especially books not \\Titten in Russian, is extraordinarily small. Books which giw the student a complete introduction into the topic and which simultaneously familiarize him with the newer results of the theory and their applications to practical questions are completely lacking. I hope that the book which I hereby present will to some extent do justice to this double task. I haw endeavored to treat stability theory as a mathe­ matical discipline, to characterize its methods, and to prove its theorems rigorollsly and completely as mathematical theorems. Still I always strove to make reference to applications, to illustrate the arguments with examples, and to stress the interaction between theory and practice. The mathematical preparation of the reader should consist of about two to three years of university mathematics.