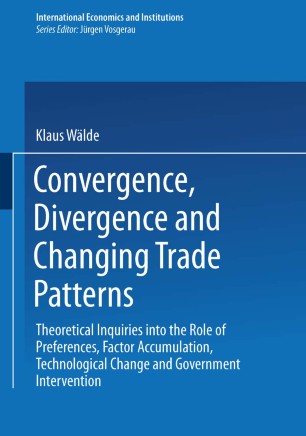 Part of the International Economics and Institutions book series (INTERNAT.ECON.)

1. Introduction and overview Until still few years ago, economic growth theory (going back to Solow, 1956; for an introduction cf. Burmeister and Dobell, 1970) predicted convergence of both growth rates and level of per capita income of economies which share identical preferences, technologies and same population growth rates, independently of initial conditions. Countries with a low capital stock grow faster than those with a higher capital stock, until, in the long-run, they all converge to a common constant growth rate. This prediction is due to the way how growth is "explained" in models of this kind. Growth of output per capita resulted, in the simplest model, from an exogenous growth oflabour productivity (see e. g. Sala-i-Martin, 1990; Grossman and Helpman, 1991a, ch. 2). Si!1ce this increase of productivity is exogenously given, the model itselfdoes not give any explanation ofits source. The prediction ofconvergence ofgrowth rates, itself, is very doubtful and observations show, that on an international level either convergence is not given at all, or that it takes a very long time. The literature of the "new" theory of growth provides a rich variety of models whose theoretical implications range from divergence to convergence and thus offers much better working tools in order to analyze real world observations. These models (starting with Romer, 1986 and Lucas, 1988) explain growth of GNP or per capita income from within the model by includingexternal effects such as a public stock ofknowledge capital (e. g.