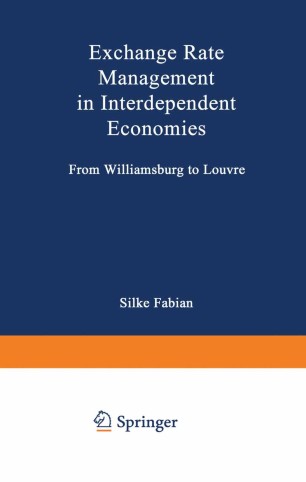 From Williamsburg to Louvre

With the breakdown of the Bretton Woods System and the begin of floating between the major currencies, central banks have been formally freed from their obligations to defend the fixed parities of bilateral exchange rates. Nev­ ertheless, since then there have been countless occasions on which monetary authorities have officially intervened in the foreign exchange market. More­ over, numerous studies indicate that exchange rates have been much more variable than originally anticipated - in real and in nominal, as well as in short run and longer run measures (see for example Hesse and Braasch [1989] and Marston [1988]). Through the experience of high real sector costs, the topic of optimal exchange rate management soon reentered policy discussions. The term exchange rate management encompasses both the choice of ex­ change rate regime as well as active intervention policies within the given 1 system. Much of the recent policy discussion has focussed on the first issue, in particular proposals of how to reform the present international monetary order. And new systems such as the European Monetary System (EMS) have emerged for subgroups of countries. However, the question of finding the optimal system has not yet been resolved.