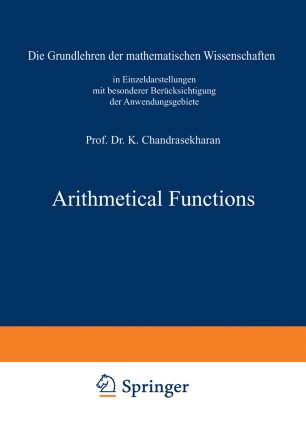 The plan of this book had its inception in a course of lectures on arithmetical functions given by me in the summer of 1964 at the Forschungsinstitut fUr Mathematik of the Swiss Federal Institute of Technology, Zurich, at the invitation of Professor Beno Eckmann. My Introduction to Analytic Number Theory has appeared in the meanwhile, and this book may be looked upon as a sequel. It presupposes only a modicum of acquaintance with analysis and number theory. The arithmetical functions considered here are those associated with the distribution of prime numbers, as well as the partition function and the divisor function. Some of the problems posed by their asymptotic behaviour form the theme. They afford a glimpse of the variety of analytical methods used in the theory, and of the variety of problems that await solution. I owe a debt of gratitude to Professor Carl Ludwig Siegel, who has read the book in manuscript and given me the benefit of his criticism. I have improved the text in several places in response to his comments. I must thank Professor Raghavan Narasimhan for many stimulating discussions, and Mr. Henri Joris for the valuable assistance he has given me in checking the manuscript and correcting the proofs. K. Chandrasekharan July 1970 Contents Chapter I The prime number theorem and Selberg's method § 1. Selberg's fonnula . . . . . . 1 § 2. A variant of Selberg's formula 6 12 § 3. Wirsing's inequality . . . . . 17 § 4. The prime number theorem. .