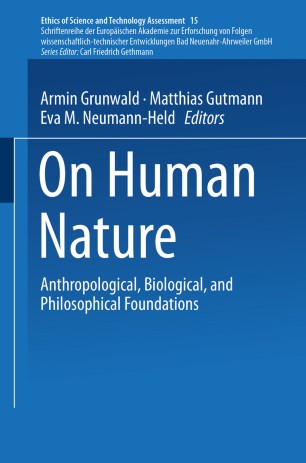 The question, what does it mean to be human, is as old as philosophy and the sciences. Furthermore, from the very beginning of human history this question for human nature was inextricably interwoven with the question for the nature of nature. Anthropology in this sense was always accompanied by cosmology, and philosophical approaches find and found their counterpart in scientific research. However, although one can clearly identify here a common origin, the systematic relationship between philosophical and scientific considerations on human nature remains nevertheless unclear. This abeyance has led to intensive struggles between both fields of research during the entire history of sciences. Thereby, the general defense and acceptance of positions changed between those, which emphasised more "reductive" and those which stood for more inclusive approaches. Rather then arguing for one or the other side of these alternatives, a third way can be seen in the search for the formulation of a rather integrative perspective. If the goal is such a multi-perspective, transdisciplinary approach, then a discourse must be initiated, which emphasises and structures the discourse between such different disciplines as socio-biology, morphology, evolutionary theory, ethics, philosophy of sciences and epistemology. On the basis of such considerations the Europäische Akademie organised in spring 1999 the symposium "On Human Nature. Biological Approaches and Philosophical Reflections". The main results of this symposium, complemented by the approaches of invited authors, are presented in the current volume of the series "Wissenschaftsethik und Technikfolgenberteilung". The authors and the editors hope to invoke a comprehensive and inclusive discussion on a modern "concept of humankind", for which the results of this books may serve as a transdisciplinary contribution.