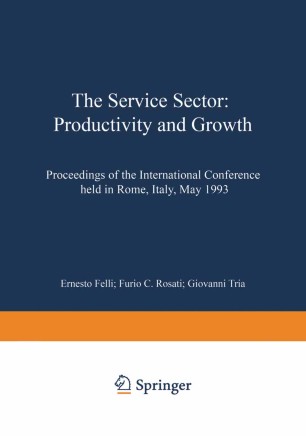 The Service Sector: Productivity and Growth

Proceedings of the International Conference held in Rome, Italy, May 27–28 1993

The economics of the service sector has recently attracted a large attention. At a macroeconomic level, the discussion has been focused on the issues concerning the relationship between the expansion of the service industry and the potential for a stable and sustained growth. Slow productivity growth, due to the largely non tradable nature of the output, lack of competition due either to regulations or to barriers to entry are among the "bads" sometimes associated with a "service led" growth. On the other hand new working places are created in the service industries at a rate much higher than in the industrial ones. Is a lower rate of technological change and the continuing of inflationary tensions the price to pay for a sustained expansion of employment in the service sector? These are in a nutshell the questions that led CElS (Centre for International Studies on Economic Growth - University of Rome "Tor Vergata") to organize the International Seminar on "The Service Sector: Productivity and Growth" held in Rome in May 1993, whose revised proceedings are published in this volume. The economists and academicians invited to the conference have faced the issues mentioned above from different perspectives, but they concentrated especially on the problems relative to growth and productivity.