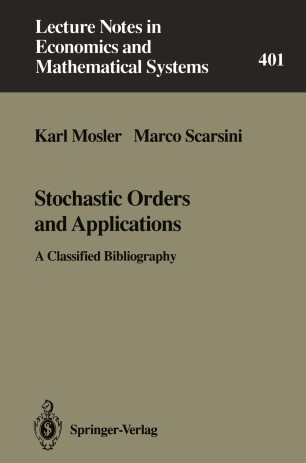 A bibliography on stochastic orderings. Was there a real need for it? In a time of reference databases as the MathSci or the Science Citation Index or the Social Science Citation Index the answer seems to be negative. The reason we think that this bibliog­ raphy might be of some use stems from the frustration that we, as workers in the field, have often experienced by finding similar results being discovered and proved over and over in different journals of different disciplines with different levels of mathematical so­ phistication and accuracy and most of the times without cross references. Of course it would be very unfair to blame an economist, say, for not knowing a result in mathematical physics, or vice versa, especially when the problems and the languages are so far apart that it is often difficult to recognize the analogies even after further scrutiny. We hope that collecting the references on this topic, regardless of the area of application, will be of some help, at least to pinpoint the problem. We use the term stochastic ordering in a broad sense to denote any ordering relation on a space of probability measures. Questions that can be related to the idea of stochastic orderings are as old as probability itself. Think for instance of the problem of comparing two gambles in order to decide which one is more favorable.