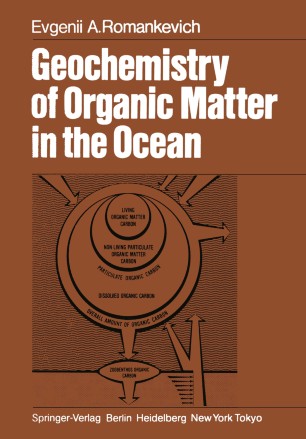 Geochemistry of Organic Matter in the Ocean

My work Geochemistry oj organic matter in the ocean first appeared in Russian in 1978. Since then much progress has been made in the exploration of various forms of organic matter in the ocean: dissolved, colloidal, organic matter sus­ pended in particles and that contained in bottom sediments and in interstitial waters. The appropriate evidence is found in hundreds of articles and several re­ view works, such as Andersen (1977), Biogeochimie de [a matiere organique a ['interjace eau-sedimentmarine (1980), Duursma and Dawson (1981). A great amount of new information has been obtained in the Soviet Union's scientific institutions on the composition and distribution in natural waters and bottom sediments of organic matter and its separate components playing a crucial role in the formation of the chemical and biological structure of the ocean and its productivity, in the biogeochemistry of the elements and geochemistry of organic matter in the Earth's sedimentary cover. The areas of exploration have expanded over the past four-and-a-half years to embrace many new, little-known regions, including the Arctic seas. In contrast to the three preceeding decades, the research has been focused on investigating the existing forms, the distribution and accumulation of organic matter in near­ continental oceanic zones between land and sea, and in river estuaries.