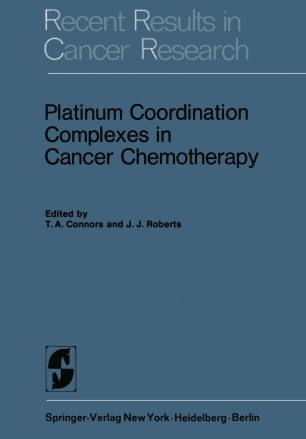 It was a great pleasure and honour to have been invited to attend this Seminar and to present a final impression. The association in this field between the Chester Beatty Research Institute and Dr. Rosenberg's School at East Lansing is something which I specially value and many would doubtless like to know how it came about. In the course of its work in carcinogenesis and on chemotherapy over many years, the Chester Beatty Research Institute was frequently drawn to the importance of many metals - as for example lead, iron, metalloid arsenic and the metalloid quali­ ties of the carcinogenic hydrocarbons. Interest started in platinum many years ago, following the possibility, c1aimed by others, that various complexes between the metal and mercaptopurine might possess significant chemotherapeutic properties. Va­ rious attempts to confirm such findings ended, however, in complete failure. Interest in platinum was revived by the fresh observations of Dr. Rosenberg and his collea­ gues, and here the outcome was entirely different. Very soon it was possible to con­ firm the intense growth-inhibitory properties of cis-platinum (II) diamminedi­ chloride and related substances. After communicating these results to Dr. Rosenberg, it was a pleasure to welcome hirn in London where he gave a Seminar which greatly engaged the interest of many of the staff. Later, several of these were to enjoy Dr. Rosenberg's hospitality at an international conference on the subject to be held in East Lansing, where many rapidly developing aspects were open for discussion.