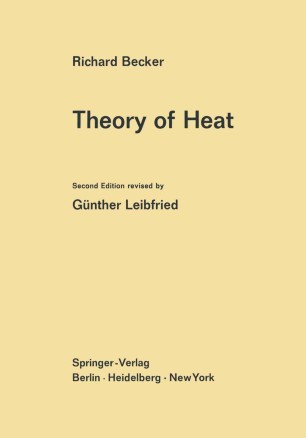 The first objective of statistical mechanics is to explain the fundamental laws of thermodynamics from first principles based on the atomic structure of matter. This problem was attacked successfully first by MAXWELL and CLAUSIUS in studies on the kinetic theory of gases. It will be treated briefly in Sec. II-A, to gain some understanding and experience before dealing with more general problems. The second objective is then to calculate thermodynamics quantities from the microscopic laws governing the atomic motion. Whenever we try to lay the foundation of thermodynamics on an atomistic theory, we are confronted with a very strange situation. The thermodynamical state of a system is defined uniquely by only a few quantities, such as pressure, volume, energy, temperature, flow velocities, etc. In contrast, the atomistic descrip­ tion needs an enormous number of variables to define a state, e. g. , positions and velocities of all the atoms involved in classical mechanics or Schrodinger's wave function of the corresponding N body-problem in quantum mechanics. Classical mechanics, for instance, can predict the future development only if all the positions and velocities are known, say at time t = O. The number of values needed for this 23 purpose is of the order of 10 . Actually, only a few parameters are at our disposal from thermodynamics. Therefore, from thermodynamics we know almost nothing about the atomistic situation.