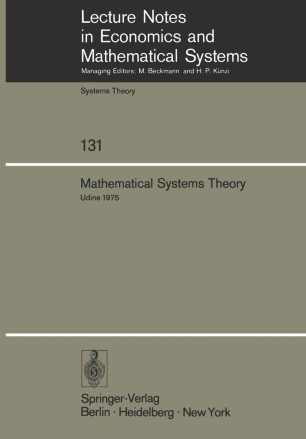 This volume is the record of lectures delivered at the Conference on Mathematical System Theory during the summer of 1975. The conference was held at the International Centre for Mechanical Sciences in Udine, Italy, and was supported by the Consiglio Nazionale delle Richerche of Italy and the International Centre for Mechanical Sciences. The aim of the conference was to encourage fruitful and active collaboration between researchers working in the diverse areas of system theory. It was also the hope of the organizers that mathematicians participating in the conference might become interested in the purely mathematical problems being raised by systems theory as a result of their participation. The success of the conference is to be measured by the extent to which these aims were fulfilled. Besides the formal programme of lectures recorded in this volume, many informal seminars were held. The cafes of Udine were often the scene of rich and varied discussions of recent developments in the field amongst the participants of the conference. Last but not least, listening to the ideas exposed in the lectures of others in a creative atmosphere was an important activity.