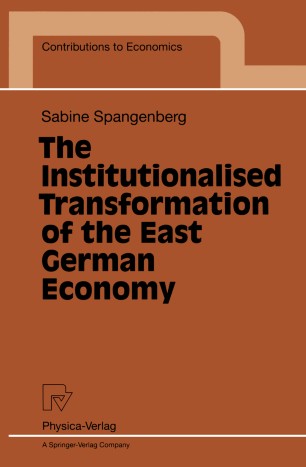 The Institutionalised Transformation of the East German Economy

"It is, perhaps, worth stressing that economic problems arise always and only in consequence of change. So long as things continue as before, or at least as they were expected to, there arise no new problems requiring a decision, no need to form a plan. " (Hayek, 1945, p. 523) This book is based on my research for the degree of Doctor of Philosophy which I received from Lancaster University, England in the second half of 1997. It is an analysis of the structural transformation of the economic system in East Germany and the behavioural relations these changes imply. The approach of institutionalised transformation (not the least by the creation of the Treuhandanstalt) is examined with a theory-based framework which is derived from system-theoretical, evolutionary and constitutional-ethical considerations as well as from the newly developed adjustment model which has been constructed as a dynamic transformation approach. A relationship between norm changes, the new institutional framework of the economic system and the compatibility of the latter with changes of the remaining partial societal systems is recognised. Rigidity factors in the system's flexibility to react as well as the adjustment of economic behaviour to structural changes are analysed. The "marginal product of system change" is defined (section 2. 8. 2).