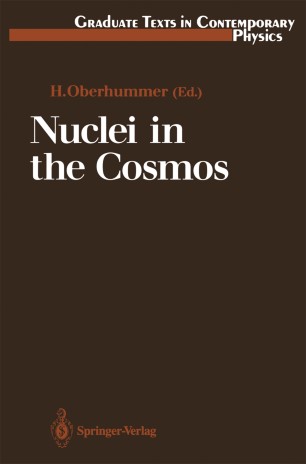 Nuclei in the Cosmos

Nuclear astrophysics as it stands today is a fascinating science. Even though, compared to other scientific fields, it is a young discipline which has developed only in this century, it has answered many questions concerning the under­ standing of our cosmos. One of these great achievements was the concept of nucleosynthesis, the creation of the elements in the early universe in interstellar matter and in stars. Nuclear astrophysics has continued, to solve many riddles of the evolution of the myriads of stars in our cosmos. This review volume attempts to provide an overview of the current status of nuclear astrophysics. Special emphasis is given to the interdisciplinary nature of the field: astronomy, nuclear physics, astrophysics and particle physics are equally involved. One basic effort of nuclear astrophysics is the collection of ob­ servational facts with astronomical methods. Laboratory studies of the nuclear processes involved in various astrophysical scenarios have provided fundamen­ tal information serving both as input for and test of astrophysical models. The theoretical understanding of nuclear reaction mechanisms is necessary, for example, to extrapolate the experimentally determined reaction rates to the thermonuclear energy range, which is relevant for the nuclear processes in our cosmos. Astrophysical models and calculations allow us to simulate how nuclear processes contribute to driving the evolution of stars, interstellar matter and the whole universe. Finally, elementary particle physics also plays an important role in the field of nuclear astrophysics, for instance through weak interaction processes involving neutrinos.