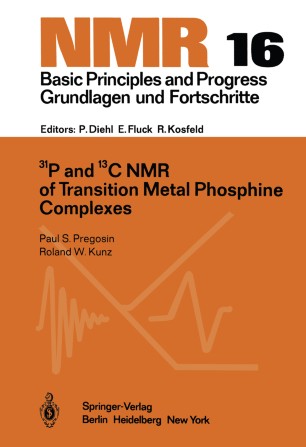 For almost a quarter of a century the words "nuclear magnetic reso­ nance" were synonymous with proton I,leasurements. During this period the literature abounded with a seemingly infinite variety of 1H NHR studies concerned primarily with carbon chemistry. Occasionally a "novel" nucleus was studied and, even in those early days, the poten- 13 14 31 19 tial offered by C, N, P and F was clearly recognized. Despite the allure, the technical difficulties involved in measuring some of these nuclei were far from trivial. Small magnetic moments and low natural abundance in combination with spin-spin coupling from other nuclei, mostly protons, resulted in a signal-to-noise problem whose severity effectively excluded the study of metal complexes with unfa­ vorable solubility characteristics. The first important breakthrough came with the advent of broad band 1H-decoupling. For example, the featureless broad 31p resonance associated with the commonly used ligand triphenyl phosphine is converted to a sharp, more readily ob­ served singlet when wide-band decoupling is employed (see Fig. 1). Despite this improvement investigation of more interesting molecules, such as catalytically active complexes was forced to await the devel­ opment of Fourier Transform methods since only with relatively rapid signal averaging methods could sufficient signal-to-noise ratios be achieved.