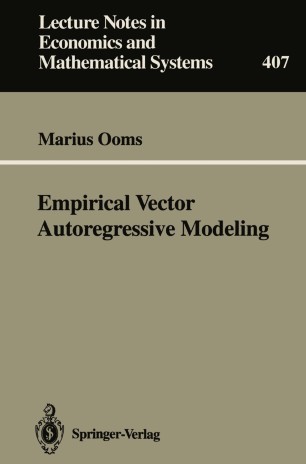 1. 1 Integrating results The empirical study of macroeconomic time series is interesting. It is also difficult and not immediately rewarding. Many statistical and economic issues are involved. The main problems is that these issues are so interrelated that it does not seem sensible to address them one at a time. As soon as one sets about the making of a model of macroeconomic time series one has to choose which problems one will try to tackle oneself and which problems one will leave unresolved or to be solved by others. From a theoretic point of view it can be fruitful to concentrate oneself on only one problem. If one follows this strategy in empirical application one runs a serious risk of making a seemingly interesting model, that is just a corollary of some important mistake in the handling of other problems. Two well known examples of statistical artifacts are the finding of Kuznets "pseudo-waves" of about 20 years in economic activity (Sargent (1979, p. 248)) and the "spurious regression" of macroeconomic time series described in Granger and Newbold (1986, §6. 4). The easiest way to get away with possible mistakes is to admit they may be there in the first place, but that time constraints and unfamiliarity with the solution do not allow the researcher to do something about them. This can be a viable argument.