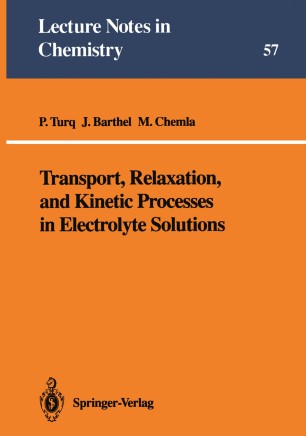 The presence of freely moving charges gives peculiar properties to electrolyte solutions, such as electric conductance, charge transfer, and junction potentials in electrochemical systems. These charges play a dominant role in transport processes, by contrast with classical equilibrium thermodynamics which considers the electrically neutral electrolyte compounds. The present status of transport theory does not permit a first prin­ ciples analys1s of all transport phenomena with a detailed model of the relevant interactions. Host of the models are still unsufficient for real systems of reasonable complexity. The Liouville equation may be adapted with some Brownian approximations to problems of interact­ ing solute particles in a continuum (solvent>; however, keeping the Liouville level beyond the limiting laws is an unsolvable task. Some progress was made at the Pokker-Planck level; however, despite a promising start, this theory in its actual form is still unsatis­ factory for complex systems involving many ions and chemical reac­ tions. A better approach is provided by the so-called Smoluchowski level in which average velocities are used, but there the hydrodyna­ mic interactions produce some difficulties. The chemist or chemical engineer, or anyone working with complex electrolyte solutions in applied research wants a general representa­ tion of the transport phenomena which does not reduce the natural complexity of the multicomponent systems. Reduction of the natural complexity generally is connected with substantial changes of the systems.