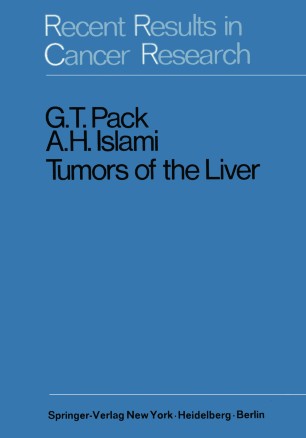 Tumors of the Liver

The surgical resection of a major portion of the liver for cancer of this viscus has long been neglected. Although the first successful resection of a primary malignant tumor of the liver was performed by LUCKE in 1891, this pioneer effort failed to stimulate interest in the operative removal of hepatic neoplasms. Earlier surgeons were intimidated by the concept of the liver as a huge vascular sponge possessed of three intricate circulatory systems. To the fear of uncontrollable hemorrhage was added the supposed hazard of hepatic insufficiency following the removal of a large portion of an organ with so many vital functions. Last but not least was the difficulty in surgical exposure. Only in recent years has the sporadic interest of surgeons been changed to a growing concern about the possibilities of extirpation of hepatic tumors by the per­ formance of major hepatic lobectomies. Four factors have contributed to this: 1) the dissemination of more accurate information about the surgical anatomy of the intrin­ sic and extrinsic hepatic circulatory systems, which has acquainted surgeons with the principles and techniques of hemostasis essential for successful operative intervention on the liver; 2) increased knowledge of the functions and regenerative capacity of the liver; 3) greater diagnostic skill aided by modern laboratory procedures; 4) improved surgical exposure of the liver by the use of laparothoracotomy incisions. Primary liver cancer varies widely in incidence in different parts of the world.