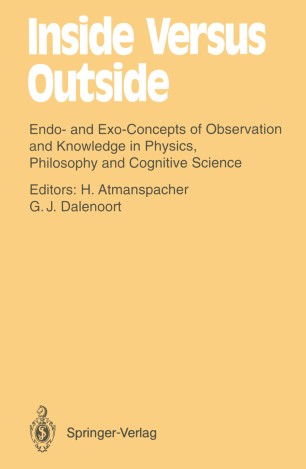 Endo- and Exo-Concepts of Observation and Knowledge in Physics, Philosophy and Cognitive Science

In our daily lives we conceive of our surroundings as an objectively given reality. The world is perceived through our senses, and ~hese provide us, so we believe, with a faithful image of the world. But occ~ipnally we are forced to realize that our senses deceive us, e. g. , by illusions. For a while it was believed that the sensation of color is directly r~lated to the frequency of light waves, until E. Land (the inventor of the polaroid camera) showed in detailed experiments that our perception of, say, a colored spot depends on the colors of its surrounding. On the other hand, we may experience hallucinations or dreams as real. Quite evidently, the relationship between the "world" and our "brain" is intricate. Another strange problem is the way in which we perceive time or the "Now". Psychophysical experiments tell us that the psychological "Now" is an extended period of time in the sense of physics. The situation was made still more puzzling when, in the nineteen-twenties, Heisenberg and others realized that, by observing processes in the microscopic world of electrons and other elementary particles, we strongly interfere with that world. The outcome of experiments - at least in general - can only be predicted statistically. What is the nature ofthis strange relationship between "object" and "observer"? This is another crucial problem of the inside-outside or endo-exo dichotomy.