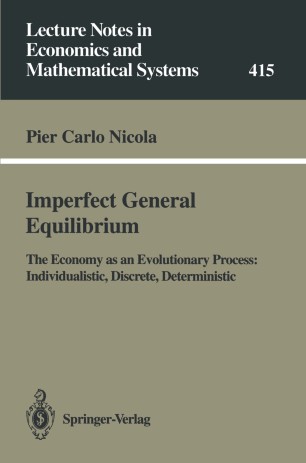 The Economy as an Evolutionary Process: Individualistic, Discrete, Deterministic

Economic theory of the last fifty years has been dominated by the paradigm of General Equilibrium Theory, based on the scientific work of Walras-Pareto-Cassel-Wald-Hicks-Arrow-De­ breu-McKenzie. Some of its grounding assumptions are: all prices are fully flexible; an auctioneer appropriately manipulates all prices according to the law of supply and demand; every con­ sumer has only one budget constraint; all agents are perfectly informed; no actions are taken by agents before a vector of prices has been found such that all markets clear. Indeed, when all markets clear every agent can implement her/his chosen (opti­ mal) action and nobody is urged to change his/her decisions. Under these assumptions it is generally said that in a (one pe­ riod, competitive) general equilibrium model there is no place for money. The present monograph takes general equilibrium as the ba­ sis on which to build the model presented. But its first aim is to completely dispense with the Walrasian auctioneer by giving firms the task of choosing their output price~ period after period.