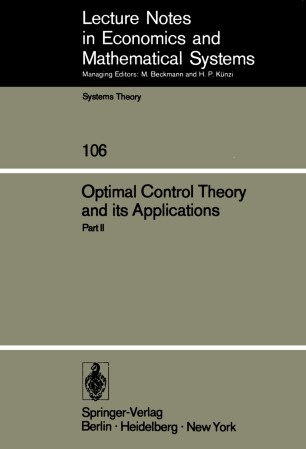 Optimal Control Theory and its Applications

Proceedings of the Fourteenth Biennial Seminar of the Canadian Mathematical Congress University of Western Ontario, August 12–25, 1973

This work (in two parts), Lecture Notes in Economics and Mathe­ matical Systems, Volume 105 and 106, constitutes the Proceedings of the Fourteenth Biennual Seminar of the Canadian Mathematical Congress, which was held from August 12 to August 25, 1973 at the University of Western Ontario, London, Ontario. The Canadian Mathematical Congress has held Biennual Seminars since 19~7, and these have covered a wide range of topics. The Seminar reported in this publication was concerned with "Optimal Control Theory and its Applications", a subject chosen for its active ~rowth and its wide implications for other fields. Both these aspects are exemplified in these Proceedings. Some lectures provided excellent surveys of particular fields whereas others concentrated on the presentation of new results. There were six distinguished Principal Lecturers: H.T. Banks, A.R. Dobell, H. Halkin, J.L. Lions, R.M. Thrall and W.M. Wonham, all of whom gave five to ten lectures during the two weeks of the Seminar. Except for Dr. Dobell's, these will all be found in Volume 105. Besides the Principal Lecturers there were three Guest Lecturers: M.C. Delfour, V. Jurdjevic and S.P. Sethi, who presented substantial bodies of material in two or three lectures and which are included in Volume 106. Many of the participants also spoke and reports of ~0st of these have also been included (Volume 106).