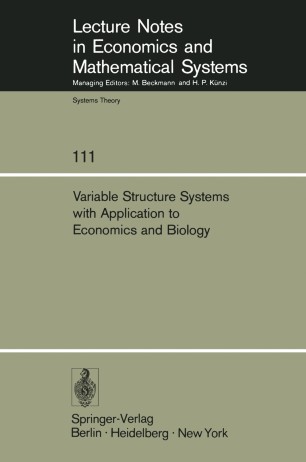 Variable Structure Systems with Application to Economics and Biology

Proceedings of the Second US-Italy Seminar on Variable Structure Systems, May 1974

The proceedings of the Second US-Italy Seminar on Variable Structure Systems is published in this volume. Like the first seminar, its conception evolved from common research interests on bilinear systems at the Istituto di Automatica of Rome University and at the Electrical and Computer Engineering Department of Oregon State University. Again, the seminar was focused on variable structure systems in general. In this case, however, emphasis is given to applications in biology and economics along with theoretical investi­ gations which are so necessary to establish a unified theory and to motivate further developments in these applications of social significance. By bringing together the talents of social and biological scientists with those of engineers and mathematicians from throughout Italy and the United States, the seminar was intended to yield a cross-pollination of significant results and a base for more meaningful future research. The editors are encouraged by the progress, with which they hope the reader will agree, is made in this direction. No pretense is made, however, that completely satisfactory integration of theore­ tical results and applications has been accomplished at this time. Among the more important conclusions which have resulted from this seminar are that bilinear and more general variable structure models arise in a natural manner from basic principles for certain biological and economic processes.