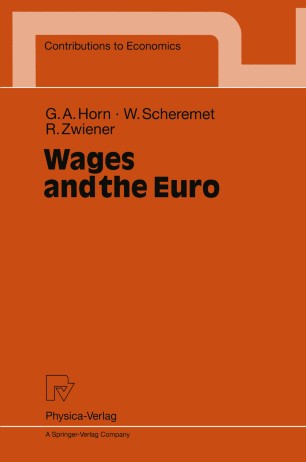 Wages and the Euro

With the abolition of exchange rates the role of wage formation in the European Monetary Union changes fundamentally and national economic policy in particular fiscal policy faces new restrictions. These are analysed in the first two chapters. A major impact is expected for wage formation. To achieve a convergence of economic developments wage finding has to follow in all EMU member countries basically the same rules. An empirical investigation using econometric methods show that this is presently not yet the case. In particular in the southern European countries wage finding is different from that in the rest of the EMU. Frequently the introduction of Euro is perceived as a signal to lower wages all over Europe to overcome the dismal employment situation. The book addresses the question whether such a race for lower wages is appropriate in terms of employment creation. Theoretical considerations as well as simulations on an econometric multi country model lead to the conclusion that to enhance growth and employment a productivity oriented wage strategy is advisable, a strategy already followed in particular in Austria, the Netherlands and Germany. In this case distorting changes of competitiveness not based on innovative successes are avoided and at the same time domestic European demand is stabilised.