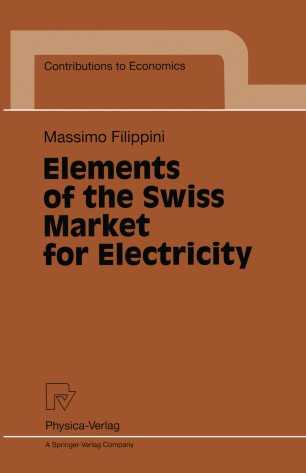 Elements of the Swiss Market for Electricity

1.1 Economic issues to be analyzed This research examines two elements of the Swiss market for electricity: the residential electricity demand by time-of-use and the cost structure of municipal electricity distribution utilities. The empirical results of demand and cost elasticities allow the investigation of interesting economic and policy issues such as the desirability of a widespread introduction of time-of-use pricing for residential customers, the desirability of side-by-side competition in the distribution of electricity and, more generally, the economic effects of a reduction of the load factor and of mergers between electric distribution utilities on costs. Desirability of time-of-use pricing In the last decade there has been an intensifying debate in Switzerland about efficacy of electricity rate reforms in order to improve the efficiency of electricity use. This debate was initiated by two main events. First, there was an important growth of electricity consumption. Second, the Chernobyl accident in 1986 aroused widespread public concern about the problems associated with nuclear power and waste disposal. As a result, in 1991 the Swiss voted, in a referendum, a lO-year moratorium on the 2 construction of new nuclear power plants. Moreover, plans to expand production of hydroelectric power (construction of new dams or expanding existing ones) have been stiffly opposed by environmental groups. These developments have consistently curtailed potential expansion of domestic electricity supply. As a result, Switzerland during the winter has to import electricity from foreign countries.