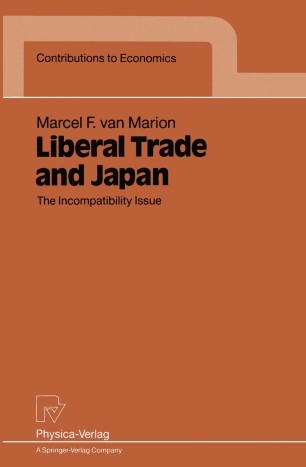 LIBERAL TRADE AND JAPAN THE INCOMPATIBILITY ISSUE IN ELECTRONICS What would be the cause of those many trade conflicts between Japan and the West? Do just lack of competitiveness and protectionism or inaccessibility of the Japanese market trigger repetitive trade conflicts or some mix? It may also be that economic systems of Japan and the Western industrial nations are incompatible. Both, the question of competitiveness and of frictions between both systems are addressed in this book. Incongruity of the economy of Japan and Western liberal system would have serious consequences for the continuity of the world trade system. H a contradiction between the two systems is supposed to exist, such a hypothesis would require analysis of the basics of the existing trade system and of the Japanese economy and what its effects on world trade are. H it would be possible to explain salient features of Japanese competitiveness from these frictions perhaps some recommendations could be made for improvement of business and governmental trade policies and of the international trade system. The present world trade system is partly framed in rules dating from the end of the 1940s and reflecting economic experience as well as prevailing - both theoretical and ideological - economic thought in the period prior to their design. Part A investigates the liberal basis of the international economic system and general position of Japan in that system.