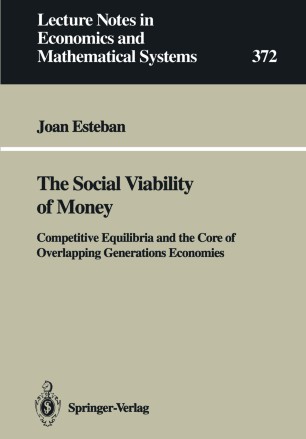 The Social Viability of Money

Competitive Equilibria and the Core of Overlapping Generations Economies

In this book overlapping generations economies are analysed from a game theoretical point of view and the social acceptability of consumption allocations is studied in infinite horizon models of pure exchange economieswith agents with finite lifetimes who behave cooperatively. The core of such economies and its relation with competitive equilibria, both walrasian and monetary and the essential characteristics of the overlapping generations model are examined. The author defines the problem of trust in intertemporal consumption allocations as a question of belonging or not to the core of economy and provides a full characterization of the core allocations for n-goods pure exchange economies with one agent per generation: a consumption allocation belongs to the core if and only it is Pareto optimal and Sequentially Individually Rational. From this it follows that for one commodity economies no consumption allocation involving intertemporal transfers can belong to the core of the economy. In other words, no monetary equilibrium is socially viable. This result is no longer true for many goods models. For that case it is demonstrated that there exist bounds on the real value of equilibrium money purchases beyond which monetary equilibria are not socially viableand with many agents in every generation it is shown that as the economy becomes large and monetary (as well as IOU) equilibria become eventually excluded from the core of the economy. These results provide an analytical rationale for the fact that in most countries fiat money is legal tender.