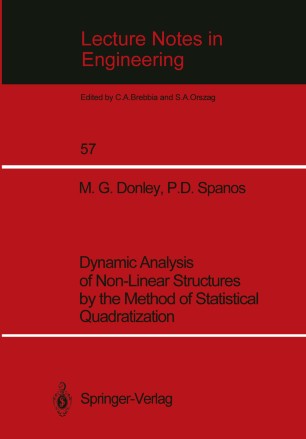 1. 1 Introduction As offshore oil production moves into deeper water, compliant structural systems are becoming increasingly important. Examples of this type of structure are tension leg platfonns (TLP's), guyed tower platfonns, compliant tower platfonns, and floating production systems. The common feature of these systems, which distinguishes them from conventional jacket platfonns, is that dynamic amplification is minimized by designing the surge and sway natural frequencies to be lower than the predominant frequencies of the wave spectrum. Conventional jacket platfonns, on the other hand, are designed to have high stiffness so that the natural frequencies are higher than the wave frequencies. At deeper water depths, however, it becomes uneconomical to build a platfonn with high enough stiffness. Thus, the switch is made to the other side of the wave spectrum. The low natural frequency of a compliant platfonn is achieved by designing systems which inherently have low stiffness. Consequently, the maximum horizontal excursions of these systems can be quite large. The low natural frequency characteristic of compliant systems creates new analytical challenges for engineers. This is because geometric stiffness and hydrodynamic force nonlinearities can cause significant resonance responses in the surge and sway modes, even though the natural frequencies of these modes are outside the wave spectrum frequencies. High frequency resonance responses in other modes, such as the pitch mode of a TLP, are also possible.