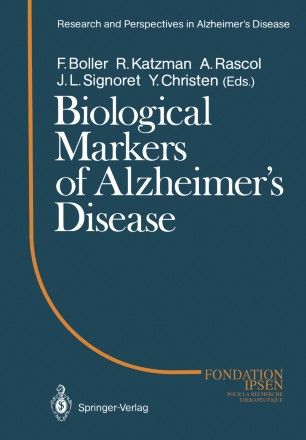 This volume presents the proceedings of the symposium held in Toulouse on April 24, 1989, on the topic "Biological Markers of Alzheimer's Disease. " This sym­ posium was the fourth of a continuing and successful series of Colloques Medecine et Recherche organized by the Fondation IPSEN pour la Recherche Therapeutique, addressing various aspects of contemporary research in the field of Alzheimer's disease (AD). The series started in September 1987 with "Im­ munology and Alzheimer's Disease," followed 6 months later in Paris by "Gene­ tics and Alzheimer's Disease" and in September 1988 in Montpellier by "Neuronal Grafting and Alzheimer's Disease. " The present symposium was organized for the purpose of gathering the most current ideas concerning biological markers of AD. The papers presented at this symposium may be roughly subdivided into three groups. The first deals with the markers of AD at the level of the brain itself. These markers are studied either through the cerebrospinal fluid or through techniques such as nuclear magnetic resonance (NMR) - approaches which respectively aim at demonstrating the cerebral changes indicated by the debris resulting from the disease, or studying the possible neurochemical abnormalities that occur in the earlier stages of AD.