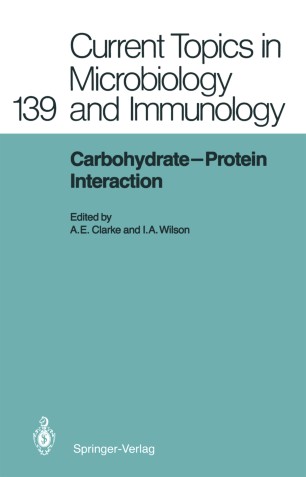 Carbohydrate as the primary product of photosynthesis has a vital role in the maintenance of life on this planet. Until relatively recently, interest in complex carbohydrates focussed on their structural role in the extracellular matrix/ cell wall of animal, plant, and microbial cells and on their role as energy sources (e.g., starch and glycogen) and struc­ tural components (e.g., cellulose) in natural products. There was, however, indirect evidence that carbohydrates could play an informational role; this evidence was from the find­ ing last century that plant lectins caused specific agglutina­ tion of certain animal cells and, more recently, that the agglutination was mediated by interactions between the plant lectin and cell surface carbohydrates. It is now clear that endogenous carbohydrate binding proteins are important in cell-cell recognition phenomena in animal systems. Recently, impressive evidence has been presented that complex oligosaccharides, derived from cell walls, are also important in plant recognition events, for example in signalling the defence mechanisms of a plant to respond to attack by insects and microbial pathogens.