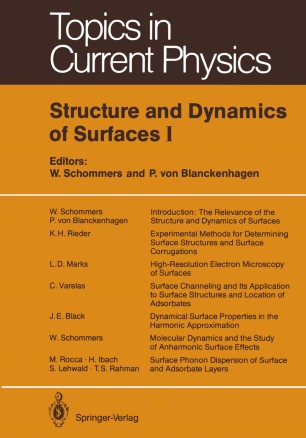 Structure and Dynamics of Surfaces I

During the last decade, surface research has clearly shifted its interest from the macroscopic to the microscopic scale; a wealth of novel experimental techniques and theoretical methods have been applied and developed successfully. The Topics volume at hand gives an account of this tendency. For the understanding of surface phenomena and their exploitation in tech­ nical applications, the theoretical and experimental analysis at the microscopic level is of particular interest. In heterogeneous catalysis, for example, a chemical reaction takes place at the interface of two phases, and the process occurring at the surface is composed of a sequence of individual microscopic steps. These individual steps include adsorption, desorption, surface diffusion, and reaction on the surface. These elementary steps are greatly influenced by the structure and the dynamics of the surface region. Especially the catalytic activity may strongly depend on the structure of the catalyst's surface. The necessity of per­ forming surface investigations on a microscopic scale is also reflected clearly in research work relating to metal-semiconductor interfaces which determine es­ sentially the properties of electronic device materials. The experimental probe on the atomic scale, coupled with parallel theoretical calculations, showed that the electronic properties of a metal-semiconductor interface strongly depend on the crystallographic structure of the semiconductor; in particular, it is im­ portant to know in this context the modification of the atomic arrangement in the surface region caused by the termination of the crystal by the surface.