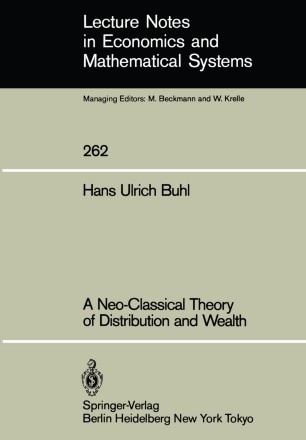 A Neo-Classical Theory of Distribution and Wealth

The distribution of capital and income in general and its re­ lation to wealth and economic growth in particular have attrac­ ted economists' interest for a long time already. Especially the, at least partially, conflicting nature of the two politi­ cal objectives, namely to obtain substantially large economic growth and a "just" income distribution at the same time, has caused the topic to become a subject of political discussions. As a result of these discussions, numerous models of workers' participation in the profits of growing economies have been developed. To a minor extent and with quite diverse success, some have been implemented in practice. It is far beyond the scope of this work to outline all these approaches from the past centuries and, in particular, the past decades. In economic theory many authors, for instance Kaldor [1955], Krelle [1968], [1983], Pasinetti [1962], Samuelson and Modigli­ ani [1966], to name but a few, have analyzed the long-term eco­ nomic implications of workers' saving and investment. While most of this extensive literature is highly interesting, it suffers from the fact that it does not explicitly consider either workers' or capitalists' objectives and thus neglects their impacts on economic growth. Thus, in the framework of a neo-classical model, these objectives and their impacts will be emphasized here.