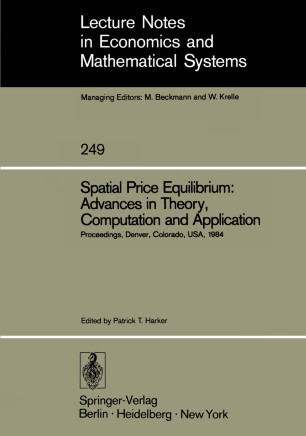 The problem of predicting interregional commodity movements and the regional prices of these commodities has intrigued economists, geographers and operations researchers for years. In 1838, A. A. Cournot (1838) discussed the equilibrium of trade between New York and Paris and noted how the equilibrium prices depended upon the transport costs. Enke (1951) recognized that this problem of predicting interregional flows and regional prices could be formulated as a network problem, and in 1952, . Paul Samuelson (1952) used the then recent advances in mathe­ matical programming to formalize the spatial price equilibrium problem as a nonlinear optimization problem. From this formula­ tion, Takayama and Judge (1964) derived their quadratic program­ ming representation of the spatial price equilibrium problem, which they and other scholars then applied to a wide variety of problem contexts. Since these early beginnings, the spatial price equilibrium problem has been widely studied, extended and applied; the paper by Harker (1985) reviews many of these results. In recent years, there has been a growing interest in this problem, as evidenced by the numerous publications listed in Harker (1985). The reasons for this renewed interest are many. First, new applications of this concept have arisen which challenge the theoretical underpinnings of this model. The spatial price equilibrium concept is founded on the assumption of perfect or pure competition. The applications to energy markets, steel markets, etc. have led scholars to rethink the basic structure of this model.