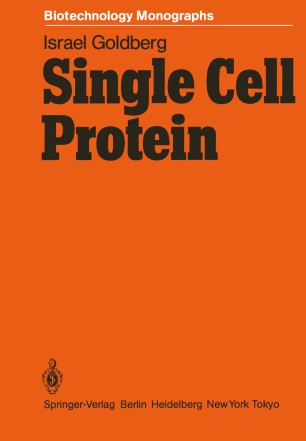 In early 1973, I returned to Israel from a post-doctoral fellowship at Harvard University, and was accepted as a lecturer in the Department of Applied Microbiology at the Hebrew University of Jerusalem. Shortly after my return, Professor Richard Mateles, who at that time was head of the Department, suggested that I purchase a good and comprehensive book on single cell protein (SCP) in order to expand my general knowledge in the subject I had started then to work on; that was microbial utilization of one-carbon (C ) compounds. l Naturally, I took his advice (after all, he was the Boss) and bought the book, which was the only general book published on this subject at that time, and was based on papers presented at the First International Conference on Single Cell Protein, held at the Massachussetts Institute of Technology (M.I.T.), on October 1967 (Mateles and Tannenbaum, editors) [1]. Through this book I became acquainted with the world's hunger problem that existed in the past, and ways in which it was to be solved by SCP products prepared from CO , fossil-based raw 2 materials, and from wastes.