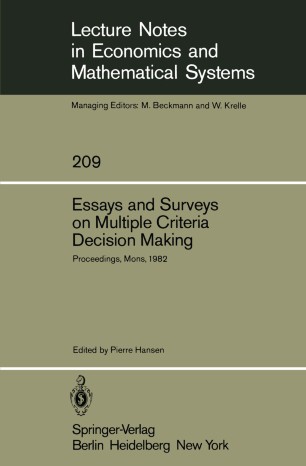 The Fifth International Conference on Multiple Criteria Decision Making, not suprisingly, had several objectives. First, it aimed at beinq a forum for exchange and intensive discussion of recent ideas on theory and practice of MCDM, following the now well-established tradition of the previous meetings in the series, organized by H. Thiriez and S. Zionts in Jouy-en-Josas (1975), S. Zionts in Buffalo (1977), G. Fandel and T. Gal in Hagen/Konigswinter (1979) and J. Morse in Newark (1980). Second, closer contacts Nere desired between participants in these meetings and other active groups in the field, prominent among which is the European Working Group on Multiple Criteria Decision Aid. Third, participation of senior or junior researchers who had recently developped important new methodolo0ies, such as the Analytical Hierarchy Process, was actively sought for. Fourth, a synthesis of the rapidly expanding field of MCDM was to be made through selective surveys by leading researchers in the various areas it comprises. Fifth, cross-fertilization and multidisciplinary research was to be encouraged through presentations on the connections between MCDM and mathematics, economics, game theory, computer science and other subjects. Sixth, much emphasis was to be given to real-world applications of MCDM, particularly large scale ones and/or pioneering work in new fields. The present volume reflects the general agreement observed among participants that these goals were largely attained.