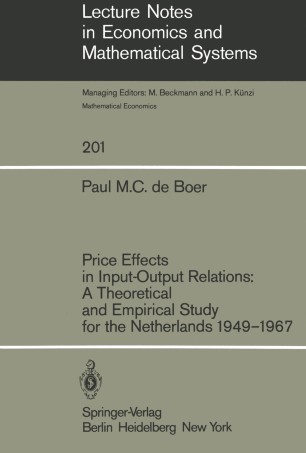 Price Effects in Input-Output Relations: A Theoretical and Empirical Study for the Netherlands 1949–1967

1.1. Pre Ziminary remarks Input-output analysis is one of the most extensively used tools of economic science. It has been introduced by Leontief (1941) who assumed that inputs into a production process of a particular sector of economic activity is a constant fraction of the output of that process in physicaZ terms. National account statisticians, however, record the inputs and outputs of sectors of economic activity in money flows. If those flows were voZumes (evalu­ ated at constant prices, pertaining to a certain base year) they could represent the physical amounts Leontief dealt with. Then, the Leontief assumption turns into constancy of ratios of volumes of inputs to volumes of output. For an over­ view of (traditional) input-output analysis we refer to section 4.1.1. In practice, however, input-output tables in volumes are seldom available; since as a rule they are expressed in monetary vaZues (i.e. evaluated at current prices). In that case one generally assumes that the ratios between inputs (in value terms) and outputs (in value terms) are constant. In appendix B to chapter 4 we prove that the two variants described above can be couched in terms of the (neo-classical) theory of costs subject to a production function.