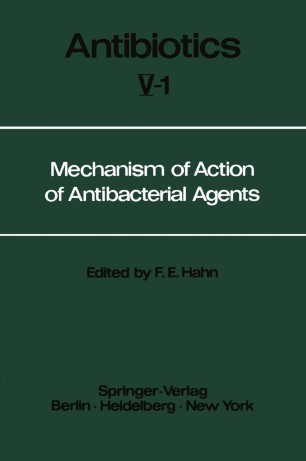 Mechanism of Action of Antibacterial Agents

The first volume of Antibiotics was published in 1967 and contained a series of review papers on antibiotic actions. The editors, Drs. GOTTLIEB and SHAW, were aware of the rapid development of this field of study and provided a number of addenda in an effort to keep knowledge up to date while the book was in production. One year after the publication of Antibiotics I, this editor had a conference with Dr. KONRAD F. SPRINGER in which it became clear that another volume on actions of antibiotics would be necessary. For a variety of reasons, this was delayed until 1975 and became Antibiotics III. It did not contain addenda since it was recognized by the editors, Drs. CORCORAN and HAHN, that still another volume would have to follow and that in a moving field, such as the study of the actions of antibacterial drugs, no publication can be definitive or remain current, except for a limited period of time. The editors of Volume III grouped the contributions into sections: 1. Inter­ ference with nucleic acid biosyntheses, 2. Interference with protein biosynthesis, and 3. Interference with cell wall/membrane biosynthesis, specific enzyme sys­ tems, and those in which the mode of action was not known with certainty.