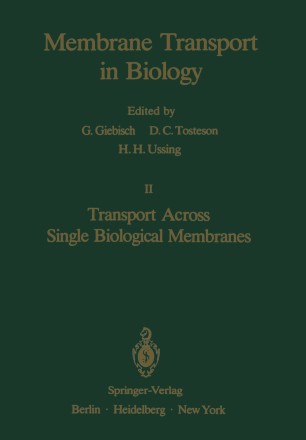 This second Volume in the series on Membrane Transport in Biology contains a group of essays on transport across single biological membranes separating the inside and outside of cells or organelles. We have not attempted to include material on all types of plasma and intracellular membranes, but rather have emphasized structures which have been studied relatively thoroughly. Four chapters describe transport of different types of molecules and ions across the plasma membranes of mammalian red cells. Two essays concern the excitable membranes of nerve and muscle cells while the remaining four chapters treat transport across several types of intracellular membranes. Water makes up more than two-thirds of the mass of most living cells. The transport of water between the inside and outside of cells and organelles is important for the function of these structures. As a result of investigations in many laboratories over the past four decades, our picture of the water permea­ bility of the red cell membranes is rather detailed when compared to the water permeability of other biological membranes. In Chapter 1, R. I. Macey describes this picture and also considers the permeability of red cell membranes to non­ electrolytes, including metabolic substrates such as sugars, amino acids, purines and nucleosides.