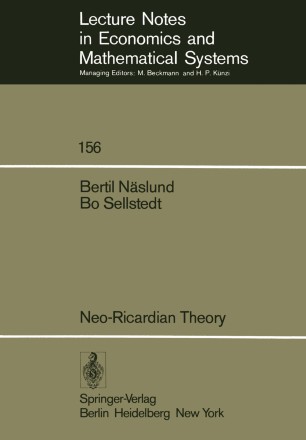 With Applications to Some Current Economic Problems

During the last fifteen years certain very fundamental aspects of economic theory have been very actively debated. The debate has often been called the Cambridge controversy, since the main parti­ cipants in the debate come from Cambridge, USA and Cambridge, Eng­ land. In this debate certain important foundations of economic theory have been criticized which are specifically important for understand­ ing price formation and income distribution. An important starting point has been Sraffa's extensions of Ricardo's theory and one has therefore sometimes called those neo-Ricardians, who have based themselves on Sraffa's work. We shall deal with some important issues that have been debated, and we shall try to describe a rather complete theoretical construction which will be an alternative to neo-classical theory. A special problem relates to the title of the book and classification of authocs to whom we refer. Perhaps post-Keynesian would sometimes be a better label than neo-Ricardian. We have used the latter name for the book due to its large emphasis on Sraffa's work. To understand the main parts of the book only basic algebra and calculus are necessary.