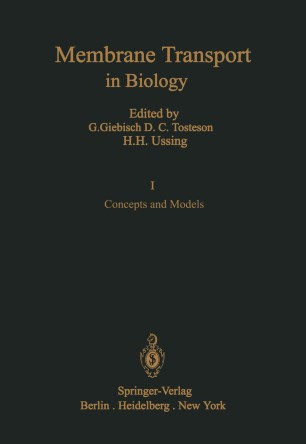 This Volume forms the cornerstone of this series of four books on Membrane Transport in Biology. It includes chapters that address i) the theoretical basis of investigations of transport processes across biological membranes, ii) some of the experimental operations often used by scientists in this field, iii) chemical and biological properties common to most biological membranes, and iv) planar thin lipid bilayers as models for biological membranes. The themes developed in these chapters recur frequently throughout the entire series. Transport of molecules across biological membranes is a special case of diffu­ sion and convection in liquids. The conceptual frame of reference used by investigators in this field derives, in large part, from theories of such processes in homogeneous phases. Examples of the application of such theories to transport across biological membranes are found in Chapters 2 and 4 of this Volume. In Chapter 2, Sten-Knudsen emphasizes a statistical and molecular approach while, in Chapter 4 Sauer makes heavy use of the thermodynamics of irreversi­ ble processes. Taken together, these contributions introduce the reader to the two sets of ideas which have dominated the thinking of scientists working in this field. Theoretical consideration of a more special character are also included in several other Chapters in Volume I. For example, Ussing (Chapter 3) re-works the flux ratio equation which he introduced into the field of transport across biological membranes in 1949.