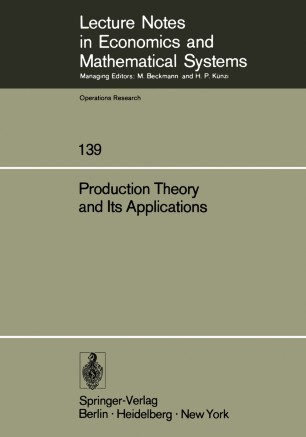 Production Theory and Its Applications

Proceedings of a Workshop

Since 1973, the European Institute for Advanced Studies in Management in Brussels has organized regular workshops in the area of management science. The aim of these workshops is to organize a European network of research in the area in order to improve the jOint research on an international basis. Some of these workshops were directed towards the development of certain specialities. The meeting in November 1974 was arranged around the theme "Production Theory and its Applications". It was divided into two sub-sections. One sub-section concerned "Industrial Production Problems" while the other was on "Production Problems in Universities". All presentations were supposed to present applied research in the area of production. The workshop was a great success. The papers were well developed and discussed. Most of the discussion was spent not so much on the analysis but on the assumptions behind the utilized analysis. However, the re­ actions presented by the audience of the workshop were a good base for the final outlay of the written material. The proceedings presented here contain the collection of papers in their final versions. By putting them together into one format we think we can present a document of high interest to people doing research in the area of production and to operations researchers solving practical production problems.