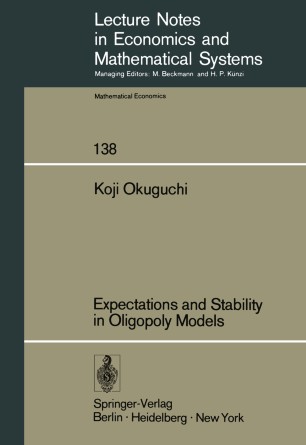 Expectations and Stability in Oligopoly Models

Ever since A.C.Cournot(1838), economists have been increasingly interested in oligopoly, a state of industry where firms producing homogeneous goods or close substitutes are limited in number. The fewness of firms in oligopoly gives rise to interdependence which they have to take into account in choosing their optimal output or pricing policies in each production period. Since each firm's profit is a function of all firms' outputs in an oligopoly without product differ­ entiation, each firm in choosing its optimal output in any period has to know beforehand all other rival firms' outputs in the same period. As this is in general impossible, it has to form some kind of expecta­ tion on other firms' most likely outputs. Cournot thought that in each period each firm assumed that all its rivals' outputs would remain at the same level as in the preceding period. Needless to say, the Cournot assumption is too naive to be realistically supported. However, the Cournot profit maximizing oligopoly model characterized by this assumption has many important and attractive properties from the view­ point of economic theory and provides a frame of reference for more realistic theories of oligopoly. In Chapters 1-3, we shall be engaged in analyzing the Cournot oligopoly model in greater detail from the viewpoints of existence, stability, uniqueness and quasi-competitive­ ness of the equilibrium.