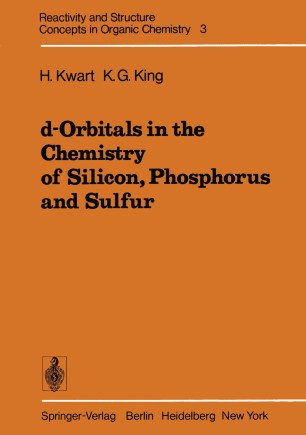 d-Orbitals in the Chemistry of Silicon, Phosphorus and Sulfur

This book was undertaken for the purpose of bringing together the widely diverse lines of experimental work and thinking which has been expressed but has often been unheard on the title question. It will be clear to the reader that a critical viewpoint has been maintained in assembling the material of this rapidly expanding area of concern to organic chemists. It should be clear, too, that the authors are not purvey­ ing a singular viewpoint and do not regard the discussions presented as the ultimate word on the subject. In fact, it should be anticipated that many ofthe viewpoints pre­ sented may have to be altered in the light of new developments. In recognition of this and to show the wayan appendix of recent results and interpretation has been included where an alteration in viewpoint on some of the material treated in the text has been necessitated by developments in the most recent literature. This ap­ pendix should be regarded as the reader's opportunity to maintain currency in all aspects of this subject ifit is kept abreast of the literature. The bibliography, from which most of the material of discussion has been drawn, is organized in a somewhat unusual manner which deserves some explana­ tion here. A reference citation can consist of (as much as) a six space combination of letters and numerals.