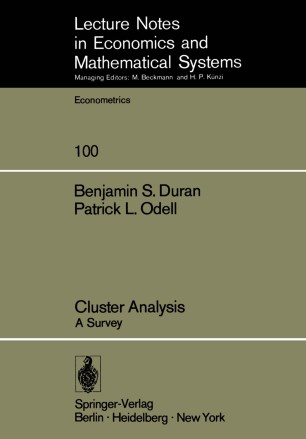 A tremendous amount of work has been done over the last thirty years in cluster analysis, with a significant amount occurring since 1960. A substantial portion of this work has appeared in many journals, including numerous applied journals, and a unified ex­ position is lacking. The purpose of this monograph is to supply such an exposition by presenting a brief survey on cluster analysis. The main intent of the monograph is to give the reader a quick account of the prob­ lem of cluster analysis and to expose to him the various aspects thereof. With this intent in mind much detail has been omitted, particularly in so far as detailed examples are considered. Most of the references stated within the text contain examples and the reader can consult them for additional information on specific topics. Efforts were made to include in the reference section all papers that played a role in developing the "theory" of cluster analysis. Any omission of such references was not intentional and we would appreciate knowing about them. Many references to papers in applied journals are also contained, however, the list-is far from being complete. This monograph has been greatly influenced by the work of many people, most notably, J. A. Hartigan, D. Wishart, J. K. Bryan, R. E. Jensen, H. D. Vinod, and M. R. Rao. Several portions of the monograph were motivated by research performed under the support of NASA Manned Spacecraft Center, Earth Observations Division, under Contract NAS 9-12775.