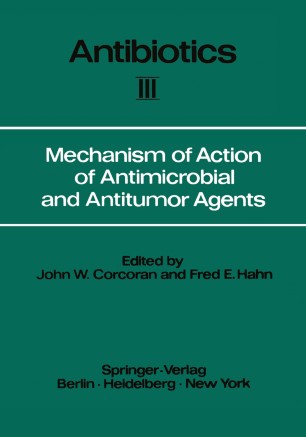 Mechanism of Action of Antimicrobial and Antitumor Agents

This volume is the third in the series devoted to Antibiotics initiated by Springer Verlag in 1967. The first two volumes were devoted to the Mode of Action of Antibiotics and Biogenesis, respectively and were received graciously. During the intervening years these two works have been used often by research workers and students alike and have been quoted extensively. Although a number of other excellent treatises on antibiotics have appeared, the Springer series has set a standard for thoroughness and quality that meets the need of the scientific community. It is against this background that the present Editors set about the preparation of a third volume in the Series on Antibiotics. Since the appearance of Volume I, also dealing with Mechanism of Action, tremendous strides have been made in the depth and breadth of our knowledge of molecular biology, microbial chemistry and molecular pharmacology and of their direct application to studies on the mode of action of drugs. The field of molecular biology itself was in its relative infancy during the preceding decade and the unique role played by many anti­ biotics in the development of our understanding of nucleic acid synthesis and function and its relationship to protein synthesis and cell physiology has led rapidly to a very precise, understanding of how many of these same antibiotics inhibit susceptible cells.