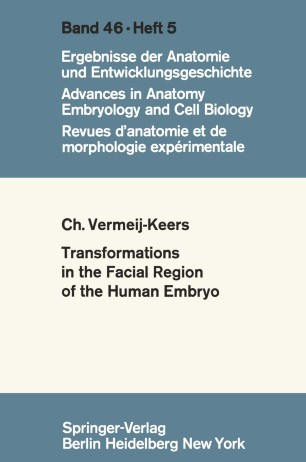 Transformations in the Facial Region of the Human Embryo

The human face is invariably interesting, even as an object of embryologic analysis. The early embryonic growth processes are located around the developing sense organs, among which the nose holds a key position. The first indication of the development of the nose is the formation of the placodes, oval areas of thick­ ened and condensed ectoderm, one on each side of the head. Each of these placodes is transformed, via the nasal groove, into the nasal tube, sometimes indicated as primitive nasal cavity. In the literature this transformation has been described as an isolated process that changes the superficial facial region. Some authors, including Wolgensinger (1950), think that the active component of this trans­ formation primarily is the ectoderm of the nasal placode. Others, i. e. Hochstetter (1891), Kallius (1905) and Vermeij-Keers (1967), assume this component be located in the mesenchyme. Peter (1913, 1949), Patten (1953, 1961), Warbrick (1960), and Andersen and Matthiessen (1967) hold both these components to be active. In the first and last of these three concepts the ectoderm of the nasal placode and the nasal groove respectively, is thought to invade the mesenchyme in the posterior direction. Invading ectoderm has also been considered to form - independent of the transformation - the organ of Jacobson and the naso­ lacrimal duct and to separate the conchae (e. g. Born, 1876; Legal, 1883; Kallius, 1905; Peter, 1913, 1949; Streeter, 1948; Andersen and Matthiessen, 1967).