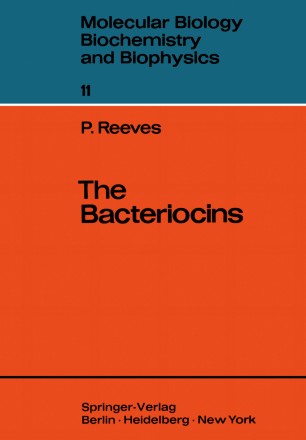 In recent years bacteriocins, especially colicins, have become widely known to molecular biologists as proteins with peculiar ways of killing bacteria. These same bacteriocins have been known for a long time to bacteriology for their unusual activity spectra and enormous variety. In this monograph I have attempted to bring together our detailed knowledge of those few bacteriocins which have already re­ ceived attention from molecular biologists, and our less detailed hut extensive knowledge of the variety of bacteriocins which exist. The field has been reviewed in whole or in part, by several authors [FREDERICQ, 1957, 1964, 1965 (2); IVANOVICS, 1962; HAMON, 1965; REEVES, 1965 (2)]. These reviews have been very useful to the author, and readers will find further references in them, and sometimes alternative viewpoints. We have already referred to bacteriocins as proteins, and in doing so have ex­ cluded many more complex antibacterial agents which resemble bacteriophages or their tails. In the author's view, these phage-like particles are probably not bacterio­ cins, but many authors include them within the definition; the more restrictive de­ finition used here has meant omitting discussion of some excellent studies on what the present author would term defective bacteriophages. In the first chapter we look at the discovery of bacteriocins and an outline of their classification. With this background we can discuss in Chapters 2 to 6 the chemistry, genetics and mode of action of the more intensively studied bacteriocins.