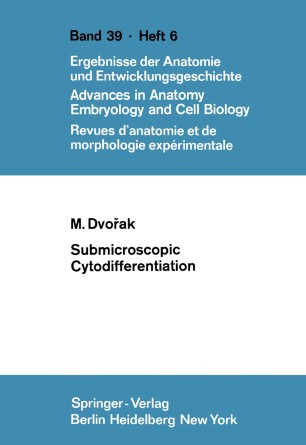 The progressive changes which occur during the life history of an individual metazoon are summed up under the term development. The adult multicellular organism differs from its early developmental stages by its size, shape, proportions, and by its parts having gradually acquired different structural and functional properties. Accordingly, several main processes involved in development, whose classification is a matter of convention, may be delimitated. Differentiation is considered one of the most important of them. In the broader sense of the word, the term differentiation is used for describing transformations, through which heterogeneity-at all levels (macroscopic, microscopic, submicroscopic)-arises or increases. The basic component of the wider phenomenon of differentiation is differentiation of cells, so-called cytodifferentiation. What is cytodifferentiation? In the course of ontogeny, the cells, starting with the fertilized ovum, via the blastomeres of the segmenting ovum and the germ layer cells, right to the differentiating and fully differentiated cells of tissues and organs, gradually acquire new properties which make them different both from a morphological and functional point of view. All changes involved in this process come under the term cytodifferentiation. Differentiation of cells (though not of all kinds of cells) continues throughout the entire life of the individual, but reaches its maximum at the embryonic period when it becomes the chief feature of development.