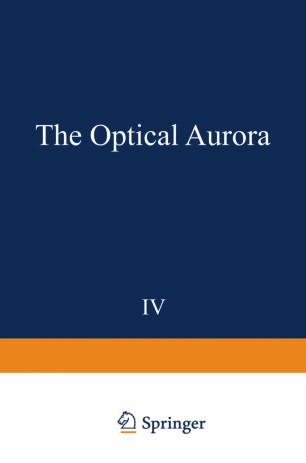 Part of the Physics and Chemistry in Space book series (SPACE, volume 4)

The aim of this book is to describe and discuss the aurora as an optical phenomenon, one which can be observed by the naked eye as well as with more sensitive optical detectors. It continues the tradition of study­ ing that impressive and imaginative play of nature, the northern lights, seen and discussed by the Greek philosphers as early as the sixth century B.c. Today the study of the optical aurora is only one of many ways of acquiring information about a major phenomenon: the ejection of plasma from the sun, the interaction of this plasma with the geomagnetic field and the injection of fast particles into the earth's atmosphere. of the optical aurora is justified by the Hence, the separate treatment particular scientific approach: detection and interpretation of electro­ magnetic radiation, approximately in the 1000-100000 A region, produc­ ed through interaction between the auroral particles and the earth's atmosphere. Other techniques, such as radio observations, X-ray observations, direct particle detections from rockets and satellites, studies of magnetic storms, and measurements of the magnetic field and plasma properties in the magnetosphere, are as important or more important than the classical way of studying the optical aurora. Nevertheless, it was felt worthwhile to treat the optical aurora in a separate book, perhaps mainly because today one author cannot master the whole subject with sufficient competence. This book is thus one volume in a series of books giving a more complete picture of physics and chemistry in space.