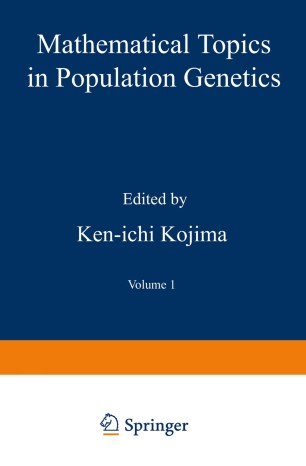 A basic method of analyzing particulate gene systems is the proba­ bilistic and statistical analyses. Mendel himself could not escape from an application of elementary probability analysis although he might have been unaware of this fact. Even Galtonian geneticists in the late 1800's and the early 1900's pursued problems of heredity by means of mathe­ matics and mathematical statistics. They failed to find the principles of heredity, but succeeded to establish an interdisciplinary area between mathematics and biology, which we call now Biometrics, Biometry, or Applied Statistics. A monumental work in the field of popUlation genetics was published by the late R. A. Fisher, who analyzed "the correlation among relatives" based on Mendelian gene theory (1918). This theoretical analysis over­ came "so-called blending inheritance" theory, and the orientation of Galtonian explanations for correlations among relatives for quantitative traits rapidly changed. We must not forget the experimental works of Johanson (1909) and Nilsson-Ehle (1909) which supported Mendelian gene theory. However, a large scale experiment for a test of segregation and linkage of Mendelian genes affecting quantitative traits was, prob­ ably for the first time, conducted by K. Mather and his associates and Panse in the 1940's.