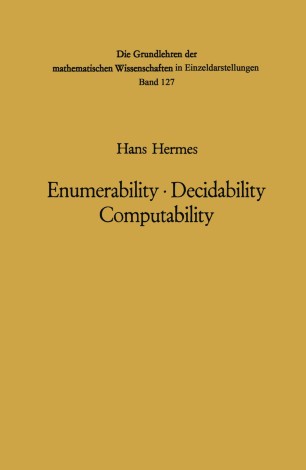 An Introduction to the Theory of Recursive Functions

Once we have accepted a precise replacement of the concept of algo­ rithm, it becomes possible to attempt the problem whether there exist well-defined collections of problems which cannot be handled by algo­ rithms, and if that is the case, to give concrete cases of this kind. Many such investigations were carried out during the last few decades. The undecidability of arithmetic and other mathematical theories was shown, further the unsolvability of the word problem of group theory. Many mathematicians consider these results and the theory on which they are based to be the most characteristic achievements of mathe­ matics in the first half of the twentieth century. If we grant the legitimacy of the suggested precise replacements of the concept of algorithm and related concepts, then we can say that the mathematicians have shown by strictly mathematical methods that there exist mathematical problems which cannot be dealt with by the methods of calculating mathematics. In view of the important role which mathematics plays today in our conception of the world this fact is of great philosophical interest. Post speaks of a natural law about the "limitations of the mathematicizing power of Homo Sapiens". Here we also find a starting point for the discussion of the question, what the actual creative activity of the mathematician consists in. In this book we shall give an introduction to the theory of algorithms.