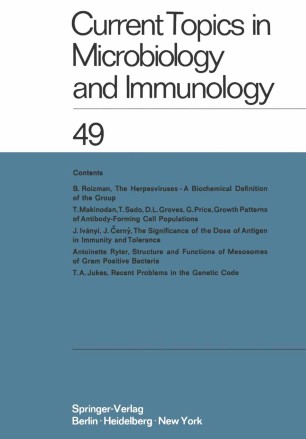 "When we give a definition it is for the purpose of using it". HENRI POINCARE in Science and Method A. Objectives The first version of this paper was written to introduce new students and fellows of my laboratory to the mysteries of herpesviruses. Consonant with this design sections dealing with well documented data were trimmed to the bone whereas many obscure phenomena, controversial data and seemingly trivial observations were discussed generously and at length. There is some doubt as to whether it was meant to be published, but it was not a review. The objective of reviews is frequently to bring order. But alas, even the most fluent summation of credible data frequently makes dull reading and too much plausible order, like very little entropy in chemical reactions, is not the most suitable environment on which to nurture the urge to discover. This version is more charitable but not less inbalanced. The bibliography reflects the intent of the paper and was updated last in December of 1968. It should be obvious without saying that no single account such as this can do justice or injustice, as the case may be, to the several hundred papers published on herpesviruses each year or to the many thousand papers published on herpesviruses since the first of the members of the family was experimentally transmitted to a heterologous host more than half a century ago (GRUTER, 1924). B. Definition 1.